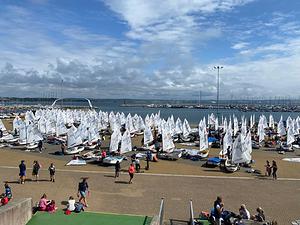 Whilst the adults of the club where out racing Cowes week, some of the clubs' Younger members where in Weymouth for the IOCA Optimist British Nationals.

Henry Pashley (aged 9) attended the nationals for the first time. This is what he had to say about the event.

"I really enjoyed the optimist nationals, it was so fun and interesting. In total there were more than 250 boats including ones from the Caribbean, Bahamas and New Zealand. We were split into 4 fleets Coached and Racing regatta fleets and Junior and Senior racing fleets. I was in coached regatta so had lots of help getting around the race course and learned lot of new things.I didn't really know anybody when I arrived but we were split into small groups of 6 and I made lots of new friends. All of the coaches were really nice and chucked sweets in your boat when you did well! He coaches all used to sail Oppies themselves and loved being asked lots of questions. Everyday started with a briefing then launch at around 10am. You stay out for around two or three hours then have about 30 minutes for lunch before you go back out again! We had coaching in the mornings and racing in the afternoons until around 4pm when everyone comes in for the debrief and daily raffle.We got half a day off and I went to Portland Castle. On two of the days It was really windy and quite wet but we still went out and it turned out to be really fun. I am already looking forward to the nationals next year even through they are in Scotland!" 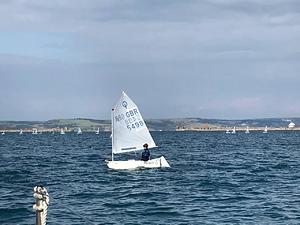 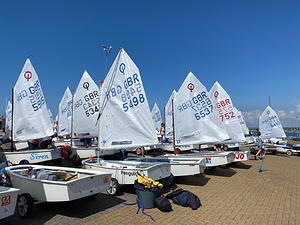