So it was with a not too early start, 7 intrepid crews from the club set off to negotiate the entrance to Bembridge for an overnight stay. One of the early boats off the blocks was the X-332 of John Noë, "La Nef IV" who set off shortly after 09.30. Like the others, the tide helped immensely as did a westerly wind, so La Nef IV found herself at the entrance to the harbour shortly after 11.30 waiting for sufficient tide rise to gain a safe entrance. At 12.30, we saw a boat exiting, so taking the indicated deeper water entrance via the south of St. Helens Fort, we carefully worked our way safely in and were moored up at 12.50. What a delight it was to have a team of lads there ready to take our lines followed by a warm welcome.

Shortly after, the rest of the rally members arrived. I can't quite remember the order, but the final cruiser in was the magnificent 30ft classicT. Harrison-Butler "Askadil" owned by long term member Simon Richardson. He has owned this 1934 boat for many a year and has lovingly restored and maintained her. The final arrival was a couple of intrepid Wayfarer sailors, who much to their delight was offered a finger berth just like the rest of us.

Thus the whole fleet had arrived: 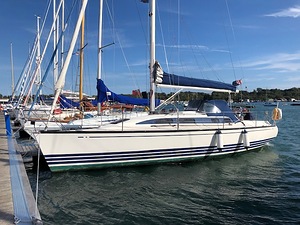 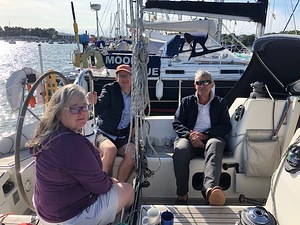 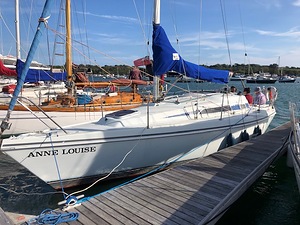 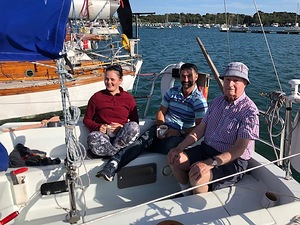 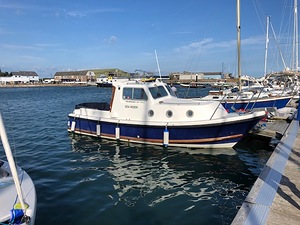 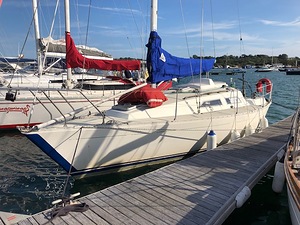 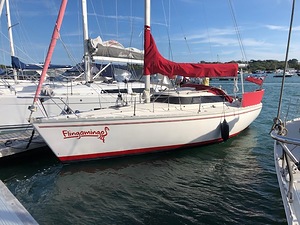 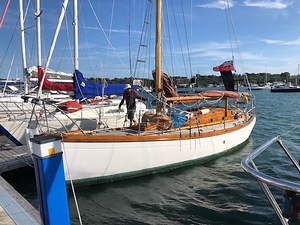 And last but not least 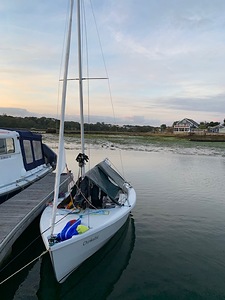 Once everyone had finished lunch and settled down, 17.00 soon arrived and a jolly drinks party was had aboard "Anne Louise" and "La Nef IV". Sadly we had such a great time that no photos were taken. Ditto the communal dinner that we all enjoyed in the marquee that evening. I can assure you though that we all enjoyed ourselves with much chatting until fairly late.

Towards the end of the evening, Paul suddenly remembered that Emma Raducano was about to play the tennis match of her life, so the Ipad was retrieved and many of us watched the match until too tired to continue and we all went to our respective ships for a kip.

The next morning, everyone did their own thing. Paul and I took a walk along the coastal path to the Seaview Yacht Club where we finally met up with Diana and Mark who sailed round in the Wayfarer and then had a superb Sunday roast on the club terrace overlooking the goings on on the water.

Shortly after 15.00, Diana and Mark set off back to Hamble and Paul and I took the higher path back to Bembridge. By this time, all other rally boats had left, leaving just ourselves and Askadil who spent an extra night there. We were originally planning to stay until Tuesday morning, but having seen the forecast, we elected to leave on Monday afternoon to beat the weather, as apparently did "Askadil"

We needed to leave as early as possible to get back to Hamble in time for the Southern bosun to collect us from our mooring. We thus left the dock around 13.45 when the tide gauge on the bar said we had enough safe water in a 20Kn easterly which first made turning the boat almost impossible. Having achieved this we set off slowly navigating ourselves in the deepest part of the channel or so we thought. I was alarmed that the depth sounder was continuously beeping at me showing less than 1m under the keel. All was OK until we suddenly stopped, having hit the putty! No amount of engine power would move us and I feared that the wind would blow us further into the lee shore shallows. Fortunately a VHF call to the marina had the boys out in the ferry! They soon towed us into deeper water. They wished us safe passage and off we went. We did hit another bump mid channel but finally cleared the harbour rounding S. Helen's Fort to the south to ensure we really were in the deeper water.

The final trip back was uneventful other than having to plug a foul tide nearly all the way, but we did arrive back in Hamble in a timely manner.

This morning, Tuesday it is pouring with rain, so we made the right call!

So ends the 2021 rally to Bembridge. I think it safe to say that the harbour team made us extremely welcome to the point where we have to go back and enjoy ourselves again.