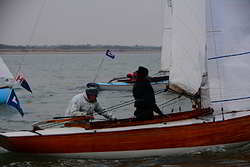 With last week's unseasonably warm weather consigned to history, a grey chilly evening welcomed the CV Obsession, as it made its way to Bald Head for the first of the Hamble River Sailing Club's Early Bird series. The Race Team were not expecting much company given the conditions, but a fleet of twenty boats gradually made its way out of the Hamble to the start area. Even more surprising was that five of these were XODs! It's well known that these venerable one designs don't normally leave the shed before 1st May. Still it's been a strange year.

With 10 knots of breeze from the North East, a windward start would have seen the fleet arrive very quickly on the beach at Warsash. So, the Race Team (Dellar, Pountain & Ramseyer) dispatched them downwind for about a mile before bringing them back on the wind to Coronation. The XODs and the single Class 3 boat, Svenja, then made their way to Hamble Point, passing Hook and Bald Head on the way. Class 1&2 had another loop before beating back to the Hamble Point finish line. These courses were intentionally short, as requested by Beverly Smith on Imptish, due to cold breeze, and the fact that someone would turn out the lights at around 1930. 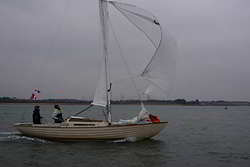 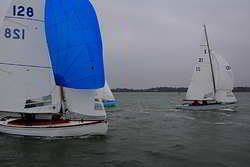 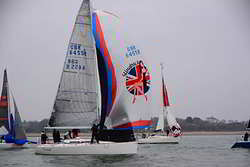 X21, Satu, Andy Hamlett led the charge across the line in the combined XOD and Class 3 start. They were closely followed by X128, Little X, Gary and Clare Rossall. Peter Baines and Rupert Smalley in X192, Felix, had been out practising their start from before the CV was on station. A lot of good it did them, "We were a little behind at the start" rued Peter clinging to his cold beer in the bar later.

Svenja, FB, Michael Stoner led the XODS all the way to the finish to take Class 3. Little X was home first in the XODs, followed by the slowly improving Felix. This left Satu in third.

The downwind start in the combined Class 1 & 2 meant that crews had to quickly remember where they had left the spinnaker bag when they laid up for winter. There was of course the odd wrap (Mojo Risin) and some were quicker than others. The two class winners from the JOG Lonely Tower race at the weekend, Frank 3, Sam and Olly Love and Imptish, Barney Smith, clearly had an advantage here.

Midnight Cowboy, Steph Merry came across the line first in Class1, some 42 minutes after the start, but was unable to save time on the inform Frank 3, with the guesting Betrand Malas on the stick. Oscar Gordon in the RS21, Sentinel came third. Imptish continued her good form leading Vlad the Impala, Peter Dessent, home in Class 2. Dark Horse, Rob Macgregor was third. 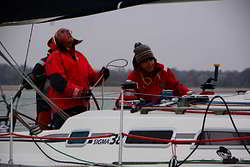 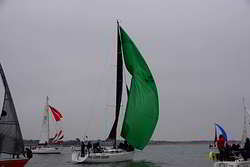 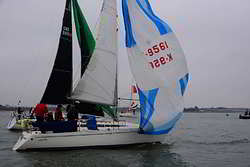 Back in the HRSC clubhouse, hot Hunter's Chicken and cold beer was the order of the day. Next week there will be about 15 minutes more daylight, so crews must prepare for a slightly longer course.