After the torrential rain earlier in the week, HRSC Wednesday night competitors were relieved to see the forecast for last night's first race of the 2021 B Series. 27 boats made their way out of the river to be greeted by sunshine and a lovely 10/15 knots NW breeze. With a very strong falling tide, this was the promise of a nice windward/leeward course with important tide dodging tactics.

The committee laid a long start line, but it ended up being very biased on the pin end which is also the shallow end by Bald Head. Coming down the line and down tide was always going to be costly, so everyone was keen to fight for the pin.

There was a bit of shouting for the XOD start and X21 ended up OCS, but shortly after the gun all boats had tacked towards the shore to seek shallow waters. After a very long downwind leg and another session of short tacking the shore, X166 finished first, X124 second and X128 third. With a unusual fourth place, one must wonder if X192 suffered from the Smalleys being away on a cruising holiday? 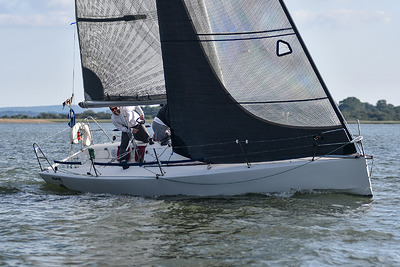 In Class 3, a competitor that shall remain anonymous declared that "despite Valhalla being OCS and having to come back, there was nothing significant to report". It must be noted that Forethought was again sailed single handed, with successful spinnaker launch and drop (no autopilot was used in the process). Cockleshell was first, Valhalla second and Forethought third.

Class 2 saw different approaches to the tricky start. Some boats went for a safe middle of the line whilst others decided to fight for the pin. A couple of boats were early and had to bail whilst Imptish was at the right place at the right time, crossing the line upwind of the rest of the fleet and quickly tacking towards the shallow waters. This start pretty much won them the race, as despite losing the lead on the water to M'ENFIN?! just before the race was shortened at Fumesy, they finished with a comfortable margin on corrected. On corrected, Imptish was first, Vlad the Impala second and M'ENFIN?! third. It was a shame to see Implacable' spinnaker halyard remain unused, but it looked like the crew was too busy enjoying the evening and beers to worry about this. 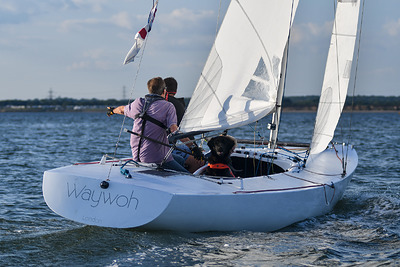 In Class 1, Waywoh most likely thanks to the furry tactician at the back - replicated Imptish's very good start and took a significant early lead. The rest of the fleet was more conservative probably something to do with draught. Waywoh was able to retain the lead for almost the whole race, only to be overtaken by Mojo Rising by the finish line. After correction, Waywoh was first, Paramour second and Seasure third.

Results are available at https://www.hrsc.org.uk/hrsc-results/2021-results and let's hope the weather will stay like that for the rest of the summer.

Report and Images by Bertrand Malas.