This week-end saw the return of the Diam 24od UK fleet to Hamble River Sailing Club for the 2019 Spring Championship.

The plan was to race both Saturday and Sunday, but the very strong winds in the Solent on Saturday decided otherwise. Bramblemet recorded steady high 20s with gusts up to 45 knots, so like any other local event, it was wisely decided to stay ashore.

The forecast for Sunday was more favourable, so it was agreed to run 3 short windward-leewards and one longer around the cans race to compensate for Saturday's cancellation.

The committee boats and trimarans found a typical Solent chop with a steady NW breeze on Sunday morning. It would have been nice to get a bit more sun, but you get what you get.

The first race was started on time, but the fleet missed the windward mark and carried on too far before being recalled by Race Officer Paul Howard. The main reason is that the Solent was extremely busy on the week-end, so the red mark was closer than expected due to the lack of space in the race area. Race 1 was swiftly restarted and saw Three Wise Monkeys (Jon Hutchings) leading the fleet around the course, with Buzz Race Team (Phil Cotton) taking second and Deka (Matthew Mulhenkamp) in third place. 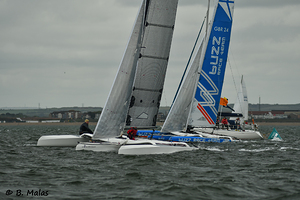 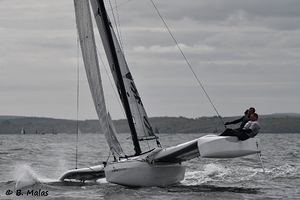 By the time Race 1 was over, the Royal Southampton Yacht Club got their fleet out of the way, which allowed to lengthen the course. Again, Three Wise Monkeys were first at the top mark, but a rudder problem forced them to retire, allowing Buzz Race Team to win the race with Deka in second place.

The breeze started to ease a little bit, so it was decided to reduce the number of laps to 2 for Race 3. This turned out to be very important when Three Wise Monkeys was closing to the finish with a significant lead but dropped their spinnaker and went back upwind for a third lap at the bottom gate, allowing Buzz Race Team a second win and Deka to claim second place. Three Wise Monkeys took third after coming back to the finish line.

At that time, the wind was back to about 15 knots with flat water as the tide had turned, near perfect conditions for the round the cans race. After a good start, the fleet rounded the top mark with Buzz Race Team in the lead. A small navigational error allowed Three Wise Monkeys and Deka to pass them on the reaching leg. The beat to the finish near the river mouth was a close battle between Three Wise Monkeys and Deka. Deka managed to overtake Three Wise Monkeys on the last tack, claiming their first race win of the day with a 1 minute margin. Race Buzz Team finished third.

Overall, Buzz Race Team was the most consistent boat and claimed the 2019 Diam24od UK Spring Championship with 4 points. Deka finished second with 5 points and Three Wise Monkeys third with 6 points.

We hope all competitors enjoyed the racing. The detailed results are available at http://www.hrsc.org.uk/hrsc-results/open-results by selecting the Diam24od class. 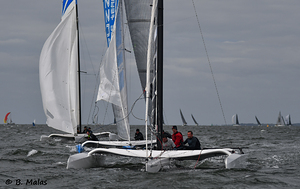 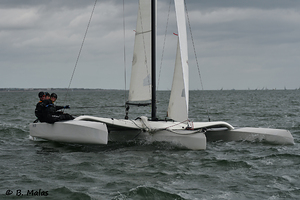