The Early Bird race team are well-practiced in dealing with adversities cold weather, short daylight hours, lack of available buoys during spring tides and all are brushed aside with their customary aplomb; but his week introduced a new variable. As regular attendees will attest; Bald Head is hard-wired in as the ODM for the Early Bird series. So, imagine the consternation on board Obsession when Bald Head was nowhere to be found! John Ramseyer suffered palpitations, Nicky Gardner had to have a lie down, and for the only time in living memory, Mike Dellar was lost for words. John was first to recover, and quickly spotted the errant buoy on board an ABP work boat; but despite lengthy negotiations with its crew, and Andy Hamlett's kind offer of Paul Jones' hairless pate, it became evident that Bald Head wouldn't figure in the night's racing. Thus, Coronation was promoted to ODM; and I am pleased to report that racing did get underway, on time, in a faltering E to SE breeze.

Courses were revised to reflect the conditions with the XODs and Class 3 venturing only as far as William; and Classes 1 and 2 to hamblewinterseries.com.

The XOD's looked in good shape till the agonizing run back from William; against the tide. An early showing from Andy Hamlett petered out at William and the top three finishers were Peter Baines in Felix, Richard Faulkner in Swallow, and Andrew and Claire Pimm in Muse. 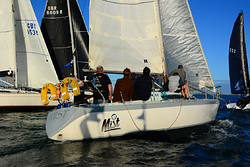 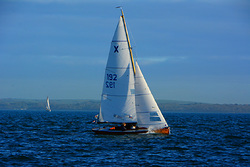 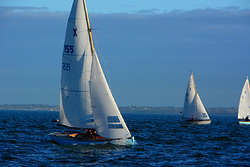 With Mike Stoner holidaying in Dorset, Robert Cartwright's Flingamingo was left unopposed, to pick-up the chocolates in Class 3.

Class 2 boasted a fleet of nine, which produced an excellent tussle at the top between debutant Ben Meakins in Polly; and Barney Smith in Imptish. Polly prevailed with Rob McGregor in Dark Horse completing the rostrum.

In Class 1 the long downwind return from HWS was perfect for Steph Merry's Midnight Cowboy despite a brief flirtation with some of the shallows. Olly and Sam Love's Frank 3 was unable to save his time on the RS21 of Oscar Codon, so had to settle for bronze. 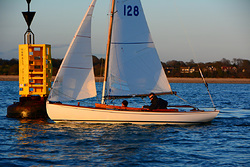 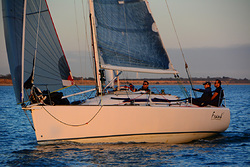 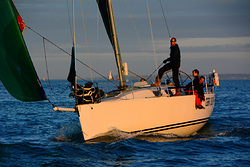 A good turnout in the clubhouse enjoyed the chilli prepared by Phillippa Pountain, and served by Trish Harvey.

With the reinstatement of Bald Head, and a neap tide; things may return to normal next week