The Commodore is proud and delighted to announce that our Foxer team from HRSC retained the Prince Philip Cup for a second year.

The victorious team and Marty Southworth's (below and centre front) report of the event. 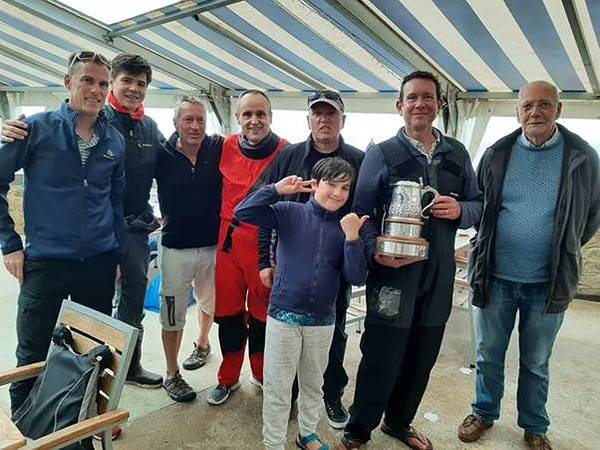 Prince Philip, Duke of Edinburgh, started sailing whilst at school in Scotland and regularly competed in Cowes Week.

The Prince Philip Cup (seen pictured) held by Shaun Barber was first presented in 1956 to encourage sailing and social contact between the Isle of Wight Sailing Clubs. It was also envisaged that everyone on a yacht should be given the chance to steer, and to this end two skippers are required for each boat.

This year the two teams were sent again to race in the lovely Mermaid Class at Seaview YC, each boat having a team of three. Darren Baker and Shaun Barber (assisted by my dad Ian Southworth) held onto the cup on behalf of Hamble River Sailing Club.

The welcome and professionalism of Seaview Yacht Club on Sunday 27th June was not marred by the rain clouds and everyone enjoyed the racing and the lovely surroundings. Those venturing from the mainland by rib were welcomed by the young team of Boatmen headed by Nick Hewitt, and I really enjoyed my afternoon with them watching the racing.