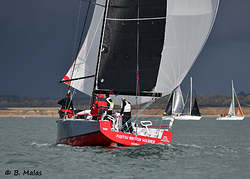 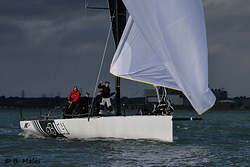 This week should have seen the culmination of the Hamble One Design Championships, with racing on both Saturday and Sunday. However, the Weather Gods, or Storm Barbara as they were called last week, had other ideas. It was clear for several days in advance, that Saturday would be a complete non-starter. So, competitors were given an early cancellation on Friday lunchtime. With a well-known and respected online weather predictor giving 17 23 knots average, but gusts of 28 33 knots for the Sunday, the Race Team gave another early cancellation on the Saturday to prevent teams travelling and boats being launched.

The Forecast was not bad enough to trouble the IRC Classes, so Peter Bateson took the CV to the vicinity of hamblewinterseries.com for a probable start area. The wind was moving between WSW and W but was otherwise as expected. By 10.00 hours it had gone south and dropped to 2-4 knots. There was much head scratching on the CV, and the competitors who had braved thunder and hail stones on the way to the start area, began to frantically adjust their rig settings and look for lighter headsails. With Windycator v2 showing 25 knots from the SW everywhere but the Bramble plateau the RO decided to wait. 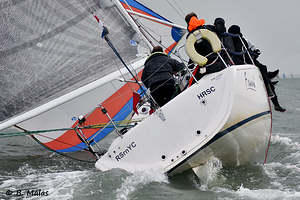 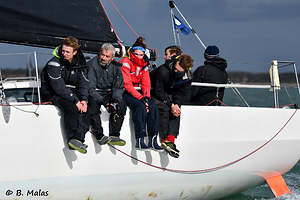 After half an hour, the wind was still light and from the south, so Peter Bateson decide it was better for the fleet to do something rather than sit around waiting. New courses were quickly designed to deal with the southerly starting breeze, but with the later legs ready for the expected south westerly. IRC1 and IRC 2 got away at 1110 and 1120, still in shifty, very light airs from the south. IRC3 departed at 11.30, with a building breeze of 10 knots. IRC1 were near the third mark at West Knoll when the "proper" breeze returned (10-15 knots) from the SW. IRC2 yachts were half way from the first mark (East Knoll) to the second, with spinnakers up, when the wind switched from very little from the S (coming from Cowes) to 15+ knots from the NW (direct from Southampton) and several boats had a minute or two spinnakering off in the direction of Portsmouth before they could drop their kites and get onto the beat, which the leg had become. IRC 3 started on a beat which turned into a fetch, but at least the second leg became another beat! The rest of the race was more-or-less beats and spinnaker runs, as intended!

Big wind shifts nearly always have a snakes and ladders effect on the positions, and so it was in IRC 1. Tokoloshe 3, Cape 31, David Bartholomew, had more ladders than snakes and arrived home 22 seconds ahead of ICY, Melges IC37, Ian Atkins, on the water. The late surging Fujitsu British Soldier, Sunfast 3600, Philip Caswell, claimed second on corrected time knocking Sailplane, Matt 12, Robert Bottomley into fourth place behind Icy. Tokoloshe 3 now has three first places in IRC 1. 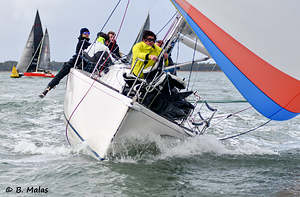 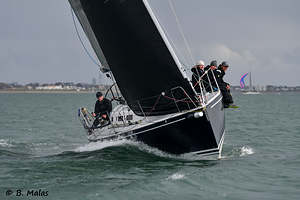 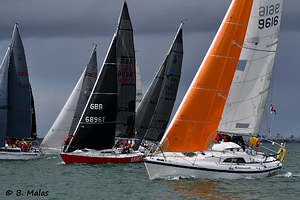 In IRC 2, Jiraffe, J/109, Simon Perry got caught up in the pin end melee, leaving Jago, J/109, Mike & Susie Yates in clear air mid-line, alongside Tigris, J88, Gavin Howe and Mojo risin, J109, Rob Cotterill..1010, Dave Butter, came third ahead of Tigris. Jiraffe, posted a sixth place, expect a fight back. Gentoo, Sunfast 3300, James Harayda was back in double handed mode this week, with Dee Caffari on board as the significant other. Jago, especially Mrs Yates, enjoyed the Prosecco and Chocolates presented by Suzy Hamel of Key Yachting the day sponsor.

In IRC 3, one or two "old" names are slowly climbing the leader board. Gr8 Banter, Mustang 30 Mk 2, Ian Handley and Tim James, saved their time to take first place on the day. Stan the Boat, Sigma 33, Toby Gorman was second and With Alacrity, Sigma 38, Chris & Vanessa Choules, was third just pushing out Quokka, Half Tonner, Peter Rutter and James Crew, into fourth spot. Barney Smith, Impala 28, Imptish, commented that they "experienced every possible wind direction on the same leg of the course" and "that there were more corners than there were marks of the course!" Well, that's yacht racing.

The Key Yachting Prosecco and Chocolates were enjoyed by all the winners, not just Susie Yates.

Next week is the mid series break, and when we return on the 8th Novemberfor the real winter bit of the series, we hope for some more consistent weather for the fleet. 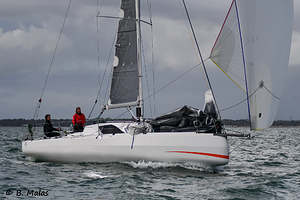 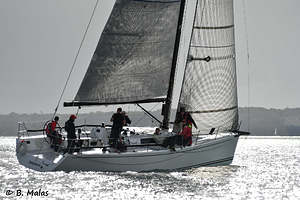 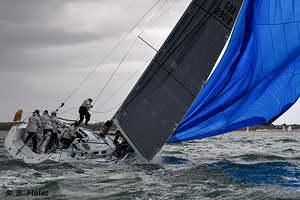