Competitors for Day 6 of the Hamble Winter Series, supported by Force 4 Chandlery, experienced testing condition in the Solent, with a mean wind speed of 24 knots from the northwest, and gusts close to 30 knots. Principal Race Officer, Stuart Childerley and his team delivered a course suitable for the conditions, with one long race for all classes. "The initial beat was in the higher average wind range, and gusts at our upper limits, the course length for each class was designed to give them all 60-90 minutes on the race course."

In IRC One, Chaz Ivill's J112e Davanti Tyres all but secured the class win for the season, scoring their fifth bullet of the series, and was once again the fastest boat around the track in any class after IRC time correction. Sun Fast 3600 Redshift Reloaded, sailed by Nick Cherry took second place by 42 seconds after time correction, ahead of Richard Patrick's First 40 Dusty P.

In the J/88 Class, National Champion, Paul Ward's Eat, Sleep, J Repeat got a cracking start. However, Avia Willment's Star continued their winning ways reeling in the early leader to score their sixth bullet for the series.Eat, Sleep, J Repeat was second and Richard Cooper's Jongleur was third. J/88 Star is crewed by Avia Willment's 8 Metre team, which won the 2017 World Championship in Norway this summer.

"The Hamble Winter Series is a great way to keep the team together after the worlds." commented Star's Bowman Ian Smyth. "The J/88 Class is great fun to sail in, and in the big breeze today, our team work and boat handling was a key to success."

"This is the 14th Hamble Winter Series for Malice." smiled Mike Moxley. "The boat loves the breeze, and the crew are used to sailing in all types of weather, we have been friends for a long time and it is great to enjoy a drink together after racing at the Hamble River Sailing Club. Winter sailing can be tough but it is really useful to keep sharp all year round."

On a blustery day in the Solent, the Race Committee was delighted to be aboard Wet Wheels Hamble, an ideal platform to conduct racing. The Hamble Winter Series Prize Giving was held at the Hamble River Sailing Club, Force 4 Chandlery Area Manager, Athena Rossi awarded the prize winners. Racing at the Hamble Winter Series continues with Day Seven on Sunday 19th November. For more information and full results: www.hamblewinterseries.com 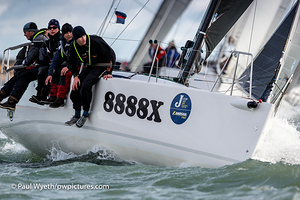 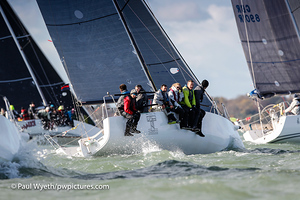