When Hamble River Sailing Club discovered that the Topper World Championships, which should have taken place 24 30th July, had been cancelled at short notice because of Covid issues, they approached the Class Association with an offer to hold a replacement one-day regional event. Just three weeks later on Sunday 26th July, a fleet of 20 Toppers sailed out of the River Hamble to the course area, south of the notorious Bald Head buoy.

Race officer Mike Foster set a simple 'windward leeward spreader- leeward' course which was used for four races, with separate starts and different numbers of rounds for the 4.2 and 5.3 rigged boats. Accurate mark laying was tricky because of the shifty wind conditions, but Aaron Goodman, son of Andrew Goodman, GBR Southern Area Rep of the International Topper Class Association, said "The course was very fair and the start line square, which led to close racing. But the conditions were challenging with variable wind strength and direction".

The team on board the Committee Boat were particularly impressed by the performance of Immi Rees, who won all the races and the overall prize in the 5.3 fleet. She robustly protected her preferred position on the start line (windward boat at the starboard end) in every race, even when she capsized with less than a minute and a half to the start. Girls were the stars in this event, with Anna Cameron winning three out of four races and overall in the 4.2 fleet. Freddie Day won the race where Anna came third. All three race winners sailed under the banner of Warsash Sailing Club, although Freddie is also a HRSC member.

Another HRSC member, James Robinson, ventured out for his first taste of racing in this regatta. His father Mike, crew of the mark-laying rib, said "I enjoyed helping out on the day and James also really enjoyed taking part - even though not with great success!" We wish James well in his future racing career. 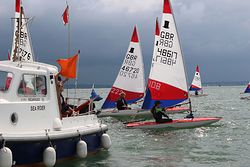 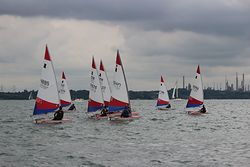 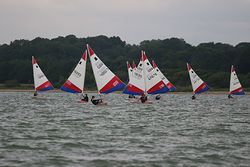 Safety Officer Mike James oversaw operation of the safety boats. He said that his lasting memory of the regatta was the happy chattering of the competitors on the water, with none of the usual shouting or screaming of "starboard". He spotted some of the competitors having a seaweed fight on the sail back to the Club.

Launching and recovering dinghies from the public slipway is always a challenge for events at HRSC. The task of ensuring the process went smoothly fell to Harry Ives, recently appointed as Chief Instructor to the Club's Sailing School, with his team of volunteers. Harry said afterwards that he found the competitors very friendly and that he had a great day, despite falling off the slipway and landing up to his armpits in the water.

Vice-Commodore Serena Alexander had been up since dawn, single-handedly preparing hot breakfasts and packed lunches for the 18 volunteers required to run the regatta. She enjoyed the smiling faces of contestants and their parents who attended the prize-giving in the Club House after racing, the smiles responding in no small way to free pizza slices and chicken legs that she distributed. In his post-event feedback, Mike Foster said "Having the hot pizza before the prize giving was a great idea, although the chicken legs disappeared very quickly! (I noted that children are not too keen on sandwiches?)

Having speedily abandoned his Safety Officer dry suit, Mike James donned his "Chairman of River Hamble Combined Clubs (RHCC)" cap to present the prizes. Exxon donates funding to RHCC in support of children's sailing, part of which was used in this event to fund the food for volunteers and competitors. RHCC also provided keeper trophies for first overall in each fleet. In line with RYA policy to increase Girls sailing, there were separate Boys and Girls prizes in each fleet, with vouchers generously provided by Rooster, as main sponsor of the event.

Commodore Steph Merry said: "HRSC plans to expand the Topper fleet for the Cadet section of the Club, so I was delighted when the Class Association agreed that we could run the Traveller event. I am so grateful to the Association for the support they provided, to our sponsors, Rooster, Exxon and River Hamble Combined Clubs, and especially to the members of the Club who stepped up at such short notice to help run the regatta. Everybody enjoyed themselves and we hope to hold the regatta again next year".

Full results are available at: https://www.halsail.com/Result/Public/55785 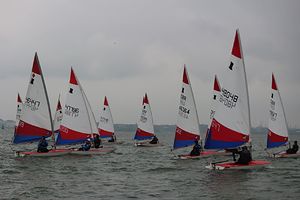 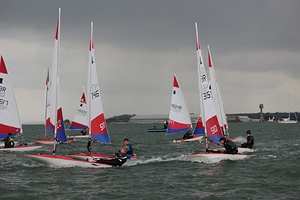