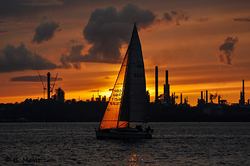 Eight hardy crews turned out for the first race in the HRSC Wednesday night Early Bird Series. As the crews prepared in the River a rain shower more suited to the month of April tested their resolve. However, by the time they reached the start area off Bald Head, the rain had stopped and a steady West North Westerly was blowing under a dark cloud in Southampton Water.

Course Race Officer Trevor Pountain decided to send the fleet up Southampton Water to the Cat Head buoy on the Hamble side, and, by the warning signal for Class 2 this looked like a great call as the wind had moved right giving a perfect beat and a true start line. The euphoria on the Committee Boat soon subsided however, as by the removal of Pappa and the long hoot, the wind had disappeared to almost nothing, which left very little chance of forward motion against the first of the ebb tide.

In Class 2, Needlework, Peter Smith and Patrick Pym hit the line on the gun and led the five Impalas making up the rest of the class in the general direction of the first mark. Progress was slow and a minute after the start it ground to a halt all together as the wind stopped completely. This meant that the two Class 1 boats, La Nef IV, John Noe and Midnight Cowboy, Steph Merry found that being 50 -60 metres back from the start line was nowhere near close enough. So, there was more than a hint of irony in his voice when, RO Mike Dellar declared " Line Clear" over Channel 72 at the Class 1 start time. 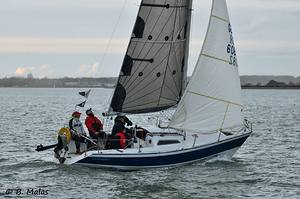 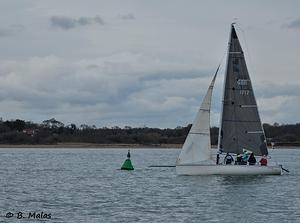 Fortunately, the breeze came back in from the W-NW which allowed most to complete their start and make over the tide again. Midnight Cowboy left it 12 minutes before actually crossing the line, but being on the right side of the shift back left made quick progress through the fleet. It was one of those biblical races – those who were first became last and vice versa.

The breeze held to Cat Head and after a number of place changes the fleet went one by one round that tidal gate and shot off down tide to Storm Force Coaching. La Nef IV had had the better of the first leg and led from the Impala Voodo, Pete Rouse. These two were closely followed by Midnight Cowboy, with the now veteran Thomas Quarter Tonner Needlework close behind.

Although down tide progress was good, the Race Team sensibly decided to shorten at the next mark, Cutter, to spare the fleet an upwind up tide finish, or lack of it, in what was now a dying breeze. Their decision was vindicated when everyone manged to crawl across the tide to the finish in time to motor back to the Hamble for Lasagne, Chicken Curry and Beer.

Class 2 was won by Voodo, Pete Rouse with Needlework, Peter Smith and Patrick Pym second and Aiden Barr's Impala Cheeky Monkey in third. La Nef IV had over a minute to spare from Midnight Cowboy in Class 1.