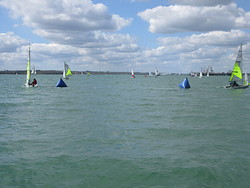 The first Hamble River Sailing Club youth event of this year, the annual Junior Warming Pan, took place on 9th of April. After a changeable week, Saturday saw sunshine and a gentle breeze - perfect for the first sail of the season. 31 sailors took part in 26 boats from the Hamble, Warsash and Royal Southern clubs, with a number competing in a Regatta for the first time. The main fleet, for the more experienced sailors, was made up of Optimists, Toppers, Fevas and Lasers racing out in Southampton water at Cat Head under the watchful eye of race officer Mike Foster. The Regatta fleet, made up of Optimists and Teras, competed in the Hamble River with race officer Alice Ryan. 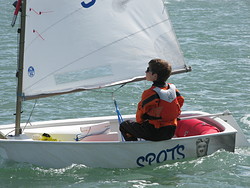 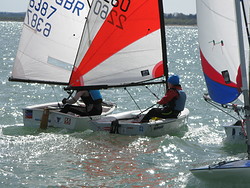 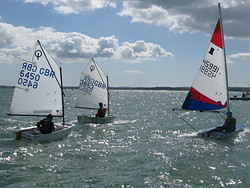 The main fleet sailed 4 races (with one discard) on a windward-leeward course: a longer course for Lasers and Feva's (fast fleet) and a shorter course for Toppers, Optimists, and a Tera (slow fleet). The fast fleet saw some consistent results at the top with Xavier Dunn (Warsash SC) in his Laser, followed by Sophie Watson and Monty Ross in their Feva, and Rebecca Vartan (Hill Head SC) in her Laser. The slow fleet saw close competition between the Optimists with Joe Rowland-Armstrong (Royal Southern YC) narrowly beating brother Sam Rowland-Armstrong (Royal Southern YC), with Caedon Faulkner-Leask (Royal Southern YC) finishing third. Alex Saunders (Warsash SC) in his Topper led around the course on all 4 races of his first regatta. He learnt the hard way about the handicap system, just missing out to the Oppies and coming 1st Topper and 4th overall.

Regatta Fleet also sailed four races (with one discard) with a triangular course in Foxer Bay, near the Warsash shore. This saw a close result at the top with Henry Ross (Royal Southern YC) in a Tera just beating Freddie Dencher (Hamble River SC) in an Optimist and Sam Wealthy (club) in third in an Optimist. Regatta fleet showed off some amazing racing with Martha Hart, Alba McDougall, Lilly Hart and Patrick Hoolahan (all HRSC) competing in their first ever open event. 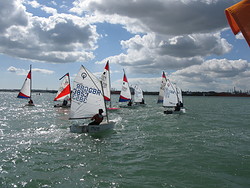 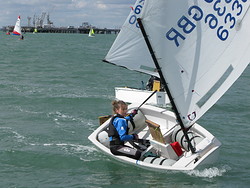 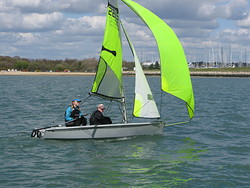 After sailing, everyone returned to the Hamble clubhouse for pizza and drinks, followed by a presentation of trophies and prizes sponsored by Seldén. The hotly contested competition between clubs was won this year by the Royal Southern YC.

Thanks to the race officers, volunteers and parents who contributed to the running of this successful event. 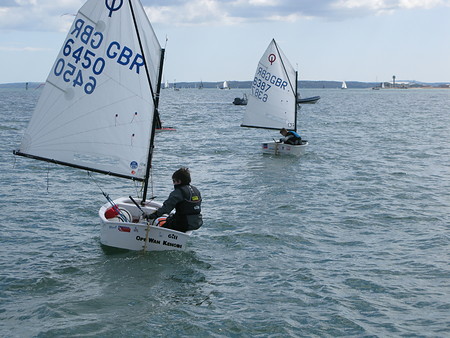