With the clocks having gone back an hour and the weather becoming more winterish, the final four weekends of the HYS Hamble Winter Series, are one race a day affairs.

The Bateson/Smalley led race team anchored the CV Wetwheels, a quarter of a mile NE of John Fisher (4Q). The forecast was for 13-15 knots from a WNW direction and sunny intervals. The courses comprised a beat to Fumesy (4C), followed by a 'slalom' downwind to Ancasta (4W) via Paul Heys (48) and Hamble Yacht Serivices (4V). There then followed some windward /leeward legs two sausages for IRC classes 1, 2 and 3 and a single sausage for IRC 4 - with a final 2-mile beat to finish at hamblewinterseries.com (4J). The "slalom course", Peter Bateson was keen to point out "was a course format first used by the course setters in Cork Week 2008", though he added "doubtless used elsewhere many times".

In the final minutes before the start, the breeze increased to 16-22 knots, which led to one or two hurried reefs and headsail changes. This proved to be prudent, as the CV saw a constant 19 knots during the race with gusts of 24 knots. Whilst IRC 1, 2 & 3 were all a little line shy at the start, IRC Class 4 nailed it with a number of boats crossing within two or three seconds of the signal. In an age where small boat numbers seem to be decreasing, IRC 4, with 16 entries is bucking the trend and is now the biggest class in the 2021 HYS Hamble Winter Series. Having suffered its first second place of the series in the last race, Protis, Ian Southworth, followed by Banter, Ian Handly and Tim James led the fleet away this week. Their slowness in Race Week 5 had, I'm reliably informed, something to do with going the wrong way round a mark, though I'm still waiting for John Santy to confirm this. 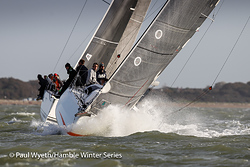 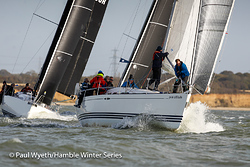 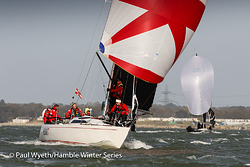 The building conditions led to some exciting sailing for the small boats and indeed, Imptish, Impala 28, Smith, Tullet and Morgan had a front row seat as Cote, ¼ ton, Jaydon Owusu, attempted to test their stability with a nose dive and crash gybe that showed off their bottom and keel for a while. When it came back the right way up, the Greg Academy kids were all smiling and laughing,if a little damp.

Protis beat Banter home by some 33 seconds on the water to secure their first win since October. M'enfin!?, Corby 25, Malas & Chudsiak were some 5 minutes adrift in third place. Ian Handely was at pains to point out in the clubhouse, that Banter had probably already peaked for the series. Ian, you never know!

In IRC Class 3, With Alacrity, Sigma 38, Chris & Vanessa Choules and Quokka 9, Half Ton, James crew are beginning to look hard to catch. They are on 9 & 11 points respectively with three races to go. With Alacrity, chalked up another 1st on Sunday and although Quokka retired scoring 8 points, it was immediately discarded. The J80 of Ross Boulder, Justify, came second and J'ronimo, J92, David Greenhalgh was third on the day and lies third overall albeit 9 points behind Quokka.

IRC Class 2 had a new winner. Gentoo, Sun Fast 3300, James Harayda, sailed for the first time in the series andshowed class leader Jago, J109, Mike & Susie Yates, the way home by the best part of six minutes on the water. All that double handed stuff obviously pays off. Mike owned up to a lack lustre start and the fact he followed some Class 1 boats to the wrong windward mark, for their tardy performance. It seems that Fumsey (4C) is hard to find when seen from the south! Perhaps, the disappearance of the Fawley Chimney, blown up the Sunday before, did have an effect after all.Jago gained from others bad luck on the second beat, when Mojo Risin's headsail pulled out of the foil. She managed to recover into second place by the last beat, but was put under pressure by Hot Rats, First 35, Robbie & Lis Robinson, all the way up to the finish. Hot Rats had a" Good Day on a great course," said Lis. "We felt safer with the chicken shute up on the two last kite legs, although it allowed Jago to sneak into second place." 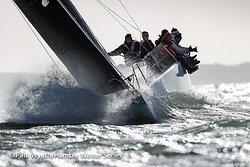 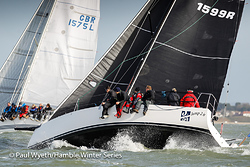 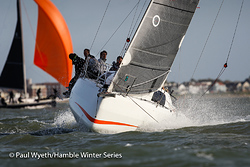 IRC Class 1 had reduced numbers, also related to the previous Sunday. A row of Cape 31s was blown down on the hard, not up, when a fierce squall hit Hamble at about 9.30 am on Sunday morning. This left the two class leaders, Jiraffe and Fanatic literally high and dry along with Tokoloshe 4. We hope to see them back on the water soon. Michael Lewis in the Lutra 30, Jester took advantage of the missing Capes." If we had a full crew we would have ripped around the course." Said Mike, "We only had 4 instead of 6, so went safe and had a nice sail, but appreciated that it was a great course." Mad Dash, Elan 410, Philip Morgan was second. Jolene, La Response and Tangent Minus 1 retired. Tangent Minus, after an incident with the Class 4 yacht Pipe Dream 11.

As the prize winners trudged back to the HRSC Clubhouse they found that the 5.00 metre tide had flooded the approach road to the club. Even when going through the car park and Dinghy Park there were a couple of places where, if you no longer had your sea boots on, shoes and sock had to come off.

The day sponsor for this entertaining weekend was the Hamble Estate Agency. Fortunately, Vicky Siou, had borrowed some wellies to bring the very welcome pink bubbles from their Hamble High Street office to the club.

Next week One Sails will be providing the day prizes. 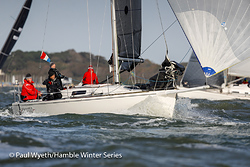 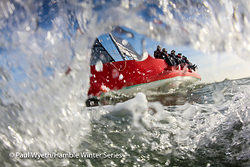 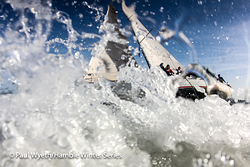