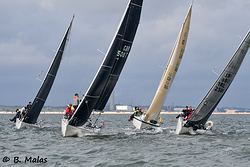 The HYS Hamble Winter Series- Race Week Four began with an unexpected rush of four new entries in IRC 4. Jon Holt, the driving force behind the Scaramouche Sailing Trust, had entered Cote, Quarter Ton, on Friday morning and then tried to enter Riot, Intro 22 and Xandt, Sonata, later that day, but the online entry system had timed him out for the weekend. With the help of a WhatsApp message or two on Saturday the entries were confirmed. Students from the Greig City Academy Sailing Programme, now called the Scaramouche Sailing Trust, work to renovate and prepare the boats and then train to race them, all in addition their academic work.

The fourth new entry was from Tom Hill and his Quarter Ton, Belinda. Tom had been out helping the Scaramouche boats train on Saturday and decided to give the HYS Hamble Winter Series a try too. No doubt the chance to have a go at the current Quarter Ton Cup Champion, Protis, had something to do with it. 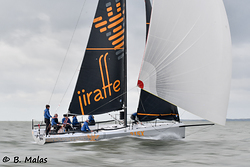 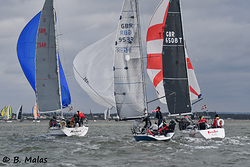 The CV Wetwheels, set up station just NE of John Fisher (4Q) in 7-9 knots of breeze from a southerly direction. A large Orange inflatable (8Q) was laid as the windward mark for all classes. Then a mixture of Solent marks and inflatable marks led to three different course lengths for the four IRC classes. IRC 1 completed 8.3 miles, with IRC 2&3 doing the same 6.5 miles and IRC 4 at 5.0 miles in what was basically a windward/leeward format. For Race 2, with a building 7-12 knots, a sausage and triangle course was cooked up by the Bateson/Smalley team. With QXI International (4N) as the common windward mark, IRC 1, 2 & 3 all completed the same 7.1 miles whilst IRC 4 had their sausages and triangles reduced to 6 miles.

IRC 1 became a battle between the Cape 31s of Johnny Cooper and Simon Perry, Fanatic and Jiraffe respectively. Despite being OCS in Race 1, Fanatic clawed its way back to win by some 2 minutes and 43 seconds. In Race 2, Jiraffe took the bullet by just under one minute. This left both yachts with a 1st and a 2nd but with Jiraffe coming out on top, by dint of countback, for the Day Sponsor prize. Johnny Cooper looked to be taking this really well back in the clubhouse, when he spied the bottles of red wine for all three places. His expression changed a bit however, when he learned the day sponsor, Soak Marine Insurance, was giving a 10% discount to the first boat in class. It seems if you own a Cape 31, this discount is worth a couple of quid! The Luta 30, Jester of Michael Lewis was third in Race 1 and Julie Fawcett's J111, Jolene made up the podium in Race 2. 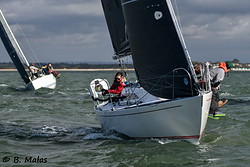 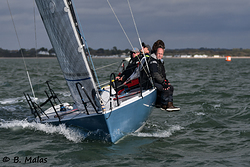 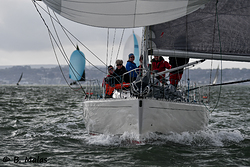 IRC 2 was also a class that had two teams with a 1 and 2 record on the day. This time Jumping Jellyfish, J109, David Richards came out on top of the countback from Mike &Susie Yates, J109, Jago. Mike commented on a great days sailing in the SSE to S breeze. "Starting right and keeping right seemed to pay on both races, with the changing tide and few right shifts thrown in." He bemoaned the fact that Jago could not stay clear in the second race however, "Falling foul of dirty air from the container ship and then getting tangled up with IRC 3 at the last leeward mark." Hot Rats, Beneteau 35, Robbie & Lis Robinson had a really solid day with two 3rd places which meant they broke up the J Boat domination of the class and find themselves currently second overall for the series. Sadly, they were unable to attend the prize giving as they had to attend Mother's 87th Birthday celebrations. I have been promised a note!

In IRC 3, With Alacrity, Sigma 38, Chris Vanessa Choules are having a real ding dong with Quokka 9, Half Ton, James Crew. The Choules in WA, managed to sneak home first by 8 seconds from Quokka in Race 1 and then by a whopping 1 minute and 47 seconds in Race 2. This leaves WA ahead by one point in the series. Both teams are already discarding some "poor" 2nd, 3rd & 4th places. J'roninmo, J92, David Greenhalgh, placed third twice on Sunday lifting them to yes you've got it third overall. 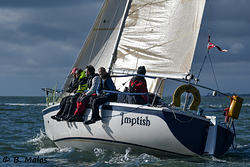 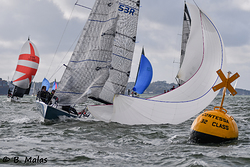 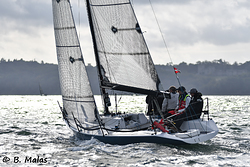 Last week there was some discussion as to whether Protis, Quarter Ton, "Southy" and Team Hamble could ever be beaten in IRC 4. Well, much as I hate to tell Barnaby Smith "I told you so!" it came to pass, that in the Year of Our Lord 2021, on Sunday 24th October, in Race 2, Banter, Mustang 30 Mk2, Ian Handley and Tim James, did them on the water and by 24 seconds on corrected time too! Both owners being on board together seemed to do the trick for Banter. Now, whether Ian Southworth was looking back over his shoulder, at the new Quarter Ton competition, on Sunday, I don't know but Cote, Quarter Ton, Jaydon Awusu, had a second and a third on the day, just behind Protis on both occasions. Cote, is the Scaramouche Sailing Trust's "fast" boat, kindly donated by Peter Morton, and it certainly is not slow. Personally, I think the Trust should have a boat called "Fandango" or "Thunderbolt" or even "Lightning", but it's probably just an age thing. Tom Hill put Belinda into fifth and fourth on the day, and Imptish, Impala 28, Smith, Tullet and Morgan, scored a fourth and a fifth. Barney wasn't too disappointed to lose the top position in IRC 4 to "Southy's Quarter Ton mates" as he put it. "It was an excellent days racing and it's very tight at the top." The Scaramouche Trust's little David Thomas Intro, Riot, Karnye Scott, having retired in Race 1, came back to complete the course in Race 2 in 11th place.

Back in the club house, Soak Marine Insurance provided the prizes. David McGregor and Simon Tonks, who recently founded the company, were both in attendance. Simon's daughter Isobel, who can be found sailing her Terra in regional competitions, presented the bottles and the very welcome discounts for first place.

Next weekend is the lay weekend, so the series will continue on 7th November, when Hamble Estate Agents will be the day sponsor. I wonder if first prize will be a free H 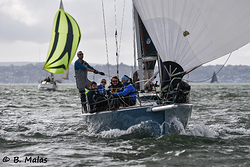 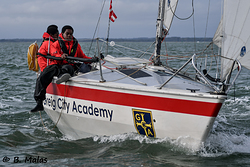 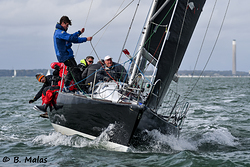