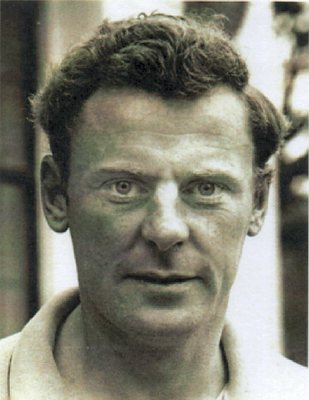 In an extremely long list of HRSC alumni Pat certainly holds a place right at the very top of the pile, from his achievements in National 12's, through his Olympic campaigns and then to offshore racing.

When I first joined HRSC, Patrick had just won the National 12's overall with Spike ( Derek Sinden ) having already won the prestigious Burton race with Mary back in '63 and he was the one that welcomed an awestruck young 12 sailor to the club that day.

He had by that time been a long time 12 competitor with half a dozen boats to his name, starting his career in Sidmouth back in about '58, and then culminating in the 1965 'Lucky Number' in which he won both the Burton and the overall week at Thorpe Bay.

That boat was particularly notable as the first of wide breed of 12's that we see today a joint design and build effort together with Martin Jones ( HRSC of course! ) building the terrible twins of 'Fantasia' and 'Lucky Number' which were to launch a new development line of both 12s and then shortly afterwards the Merlins too. 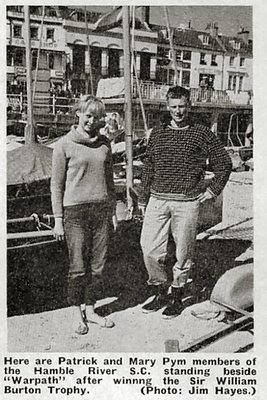 After the 12's then from 1966 Pat set his sights on the Olympics, and the Finn was the natural fit for him as one of the toughest and most physical boats to sail in the classes of those days.

He was soon making his mark in the class as an extremely competitive sailor and moved rapidly up the world rankings until in '68 he was the Olympic reserve and tune up partner in Acapulco for Mike Maynard.

Quite apart from the sailing side, the technical aspects were another area where Pat was developing the Finn, and with engineer David Hunt ( HRSC and also FD world champion with John Oakley ) they set up Needlespars and developed the technology for the aluminium Finn masts, and these soon came to dominate the Finn fleet and became the official suppliers of the Finn mast to the 1972 Olympics.These reigned supreme until the advent of carbon fibre mast moved the game on once more.

Pat himself was the Finn representative for the Munich Olympics and on the way to that position had the infamous 'Pym the Paddle' incident in Kiel.

Not one to suffer foolsbut most of us that were racing in those fleets had similar manhandling experiences around the marks from our continental friends, and our sympathies definitely sided with Patrick.

Time for change of direction, and in the offshore racing field then the IOR ¼ tonners were the hotbed of developments and Patrick commissioned 'Needlework' from David Thomas ( HRSC ) another ex Nat 12 sailor - who was establishing himself as a designer following the successful debut of 'Quarto' back in '73.

I happened to be working for DT at the time and was much involved in that program with Patrick, building the boat at the Elephant, winning Round the Island overall in '75 and on to the ¼ ton worlds in Deauville.

The mast of course was from Needlespar with many innovative features as could only be expected.

First time to be actually racing with Pat, always enormous fun, and easy to see the intense concentration and competitiveness that he brought to everything he did, allied with a dry sense of humour that would surface even under the most trying times.

Next step up was to 'Solid Silver' ½ tonner, again with Needlespar rig for a while, and then he would make the step into helming many other successful boats on the vibrant offshore scene.

His sense of humour was much needed one time when he helmed my 'Chartreuse' half tonner in the Poole worlds and we started the long offshore race with no gas for the cookercan't remember the exact words but they were as ever very much to the point!

Top flight competition always called, and Pat was helmsman on Brian Saffery-Cooper's 'Dragon' for the winning '81 British Admirals Cup team, which was right at the height of the IOR offshore racing period.

Next up he helmed the lovely 'Rakau' ( Bryan Ferris/Martin Lowson ) for a couple of seasons to be Yacht of the Year, Solent Points champion and then Fastnet Race class winner, cementing his reputation as both a top inshore and offshore sailor.

Equally adaptable to any boat, the next years had him successfully racing in J24's and Brian Ferris takes up the story

"J24 Worlds out of Poole 83 or 84. It was a terrible day low visibility blowing old boots one boat had sunk. We were sailing off Bournemouth although we couldn't see the beach when we broke the rudder which J24s were prone to do. We had rigged a jury rudder but couldn't hold the course to take us offshore. The only thing that worked took us towards the beach. Things were a bit tense. Someonesaid at least it's just sand in there to which Pat replied We'll be OK the pubs are open in half an hour!!!! The whole crew cracked up. Tension broken brilliant."

Half tonners again with his own 'Rooster' and then joined up with Peter Smith on 'Scorpion' and winning Cowes week class in that boat.Finally closing a bit of a circle, he bought back 'Needlework' with Peter, rebuilt her after the long absence, and then proceeded over the next ten years to win way more than their fair share of races!

Not quite managing to repeat the 1975 Round the Island overall victory, but a 5th overall in 2014 and placed in class a couple of times was no mean feat for a boat designed and built nearly 40 years earlier, and more races were to be won right through to 2016.

The practical and technical aspects of sailing were always of interest to Patrick, Needlespars became an established name in the dinghy racing market, he built an Optimist and a small junior sized windsurfer along the way for the family, and having retired became an official measurer for the RORC for all the IOR and then later IMS and CHS racing yachts.

Memories for me of many rating sessions with Pat on the Hamble, and more than a few times staying with Pat and Mary the night before a crack of dawn start, to make use of the quiet of early mornings on the river. Meticulous and patient in his approach, the boats measured by Pat were always going to be spot on, and if something didn't quite add up then double checks were the order of the day. 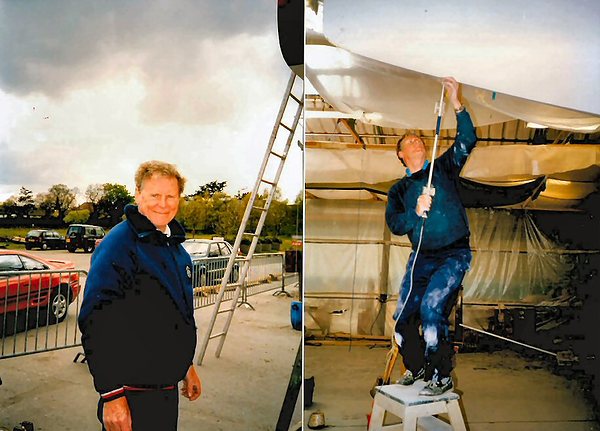 As ever it was a real pleasure to be'simply messing around in boats' with him and those days will always be memories to be treasured, along with the hospitality of both Pat and Mary along the way he will be much missed my heartfelt sympathies to Mary, Alex and Tasha.

Never one to sit on his hands, then the following from Peter Smith takes up the story.

I first got to know Patrick in the early 90's.He owned an HB 31 called Rooster and I owned a Harwich half Tonner called Scorpion.We were usually in the same class and enjoyed some good close racing in the Hamble River Winter Series and the Warsash Spring Series.It was after one of the latter campaigns that, having laid Scorpion up for the winter, Patrick asked if I would sail with him on Rooster for a Charity race the next week.We seemed to get on well and when he later admitted that he was selling Rooster, I asked if he would sail on Scorpion.We went on to enjoy a number of successful seasons.

Our most notable success was in the 2000 Cowes Week.We were leading our class with mainly firsts, when the Wednesday dawned with half a gale blowing.We set off, but about half way through the race we were dropping back in the fleet and the whole rig looked wrong.Patrick went below to investigate. Coming back on deck and with a serious look he reported the mast had broken where it passed through the deck and was grinding down through the lower section, causing the whole rig to go slack.We lifted the two parts out back in Hamble that evening and met the next day to decide on a course of action.Patrick came up with the scheme to deck step the mast, which we accomplished that day and were back on the circuit to win on the Friday thus winning the week!

About this time I had purchased a derelict steel tug that was about to be scrapped.Patrick came to work with me for the 12-months it took to re-build her and once operational, crewed with me on local and coastal towing operations.We sold the tug in about 2004 and in 2006 being bored with retirement, my wife Anne and I started Meercat Workboats Ltd.Initially in a field then later in purpose built workshops, the company built road transportable steel workboats.Of course I couldn't think of such an adventure without Patrick coming aboard.His excellent carpentry skills stood us in good stead and each boat fitted out was an improvement on the previous one.By his own admission he was not the fastest worker, but one never had to check his work and so it worked very well.We sold the business in 2016 and at that time had built something like 23 boats supplied worldwide.Patrick had fitted out each wheelhouse and installed all the low-voltage electrical systems.He stayed with Meercats for a number of years, but their move to a new workshop in Hythe meant more travelling than he wanted and so Patrick retired.

It was during our time with Meercats that we acquired Needlework.A wooden quarter tonner, Patrick had had her built in 1974 to a David Thomas design.Very radical with shrouds on sliders and an engine that pulled the boat rather than pushing it, Patrick told me once that the most miserable night he had ever spent was on Needlework trying the sleep under a leaking spinnaker chute that ran the length of the saloon. Regrettably she was getting quite tired in later years, but was still capable of winning most races she entered. We entered the 2014 Round the Island Race and achieved a creditable third in class, but more importantly we were fifth overall not bad for a forty year old boat!We continued to sail it until Needlework was sold in 2017.

Patrick and I lost touch in the obscurity of retirement so it was a considerable shock to learn of his passing.Anne and my condolences go to Mary, Alex and Tasha